Things have been going quite well in the Terror camp since the addition of Mick! We’ve got the live set down now, and starting to work on new songs! While its way too early to tell the songs are sounding like they’re going to have a faster and more brutal feel to them!

We’ve also been playing live and played our first official show back at the German Club last in March and a rural car / metal fest party type thing in NSW in April. Michael managed to capture our song “The Glory of Metal” so you can check it out here 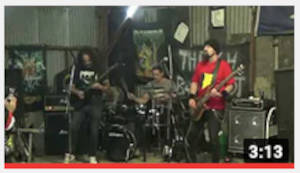